The Hmongtung-though its origin inexplicable and lacked testament-is believed to be name of aperson(i am not clear) as he fenced his house with anhmong thing. It is a sub-group of Kom (Kakom)of which besides the cave incident, cultural closeness, traditional similarities and customs or dialect as its affinities.
The origin of the Mhongtung is believed to be deeply rooted in Burma (Kapo) erstwhile Myanmar. The cruelty of the King Akva and the black plague aggravated the environment which escalated into  hell for the mhongtung group. As the result, they left Burma. After leaving Kapo, they entered into Lusei Hills. Here also their plight continued; the indigenous tribes-Lushei, poi, Lakhel and Shaneirong (dwarf tribe) and their intra-feud affected the hmongtung in general. Unable to bear the brunt, they moved towards Northern Tripura. However, the same fate followed them. Difference developed which consequently malaise the relationship with the Hrangkhols, Ranglong, shatkachep, Darlong, Chorai and Tuikup over socio-cultural differences. So, they left Tripura and moved into North Cachar Hills and then to the south of Manipur-in the surrounding region of Tuivai and Tuirong. As years passed, conflict had grown up with the Zongye and the Chiljang coupled with the strife of the Manlung and Mangchong which added up more load on it. At that time, Kuki Raja Mangjahu was in power. As the consequent, they left Cachar and settled in Kailam Hills. Finally entered into the central region of Manipur, Kapeibung, a hill side region of Thampui (Loktak) and then to Thingcherbi to Mhongbung. During this time, the Meitei King exploited them harshly: they were made to carry King’s carriage, pull chariot and were put in a menial works. In order to escape from this inhuman exploitation and the perpetual subjugation, they moved to the Hill side, west of Tamenglong at Laijang. Beginning from the stressful Burma episodes to Tripura, from Tripura to Cachar and finally to Manipur, the nomadic hmongtungs had many villages such as:-Kholamdar, Khovaibe, Khojampher, Khothutpui, Mhongbung, etc. Later they established new villages like Songpherkholen, songpherlhutjachung, Mongkotyang, Lhongchin etc. These villages are in the government records; however, the communal tension that struck Manipur in 1990s compelled them to leave for. Now these villagers though scattered, few re-establish villages in the valley region such as the Songpher and Songpherkholen in Saikul side respectively. The Mhongkotyangs moved into IchumKeirap, Khongnangpokpi, Saikul, Khudengthabietc.In fact, the incident also had great impact upon the social and economics of the affected people; the grave part is of the economic morass that ate them to the root and the morale degradation, a repercussion of the poverty. However, as every dark cloud has a silver lining, the event also led to cultural and political amalgamation with the valley komrem people, eventually leading them to adapt to the new ambiance.  Indeed God is great, and has been endowing them with multiples. He has wiped away the tears. The mighty God will restitute and double what had been lost. To God be praises. 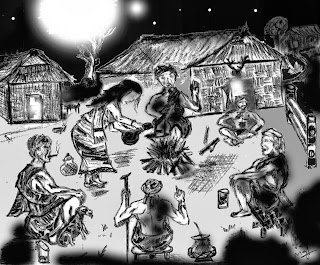 After the Japanese left LangkhongKhunnou for Songpherkholen, the British soldiers, a troop of 100 built camps along the roads to Kangchup and LukhamNagas. These camps were strongly fenced with thorns and barb wires. One day, PuTongjaler‘s cow got stuck at and killed, and he was compensated later. According to the rumor that spread in the area that some of the soldiersof the camp were Africans and they ate human. This had frightened the village children very much.


During those days, fleet of war-planes flew in the deep clouds regularly with a thundering sound but without any scene of them. So, the villagers thought that those were the sound of the trumpet call of the SECONDCOMING.  Also, the sound made by the war-planes had become the talk of the village; menfolk of the village gathered at one place, drank and debated, and even sometime quarreled among themselves over the issues of: who would win the war?Pu.ThangjalenLuphengheld that Japanese won’t win the war as they did not know how to taste tobacco liquid (Lheibotui) and instead drank up at one sip.Pu.HmunkhothangTelensaid, “Kumpini(King George) men collected disease into a jar, and they’re gonna open in the Japanese land; the disease will kill all big and small man alike”. Another villager, Pu.LerkhopaoHmangtealso added that the queen of Britain (Kumpinirengnu) had sent 10 bottles of wine to the maharacha (king of Manipur). Like this way,every evening, the village menfolk had debated over the war issues and other petty matters. Among the women group, Aunt LamjangLupheng, a spinster had given a very funny comment on the masculinity comparing the Japanese and them (einipasehei). She saidwithout feeling any regards for, “You people had high regards of the Japanese or the whites; I have seen themwhile relieving themselves (defecating)and they……. no difference from our men!”
Time 2:33 AM No comments: 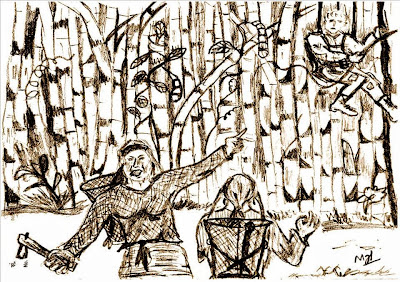 During 1942-45(Second World War), on April, British soldiers were stationed at Haochong village, Tamenglong district. In the region, there had been sporadic bombing by the British Air Forces.  One morning, a plane was hovering around with unusual sound and later fell on the ground. It was also later learnt that the first pilot sacrificed himself by allowing his co-pilot to abort the plane with a parachute. But, the unfortunate pilot who jumped off the plane was caught on bamboo plants at the borders of a paddy field belonging to a villager of Songpher.  Two women farmers, Pu Chongroibum’s mother and her friend, on their way saw the white, tall and brownish-hair pilot hanging on the branches of the bamboos. Then, out of panic, they screamed, “Oh my god! Oh my God! Look up that is an angel! May be the angel they talked about who is about to come very soon….”So, the two without looking back ran away. Pu.Sherkhochung Hmangte whose field was adjacent to the site met the two women and together they went to the site; the white-pilot was still hanging then. They cut the bamboo plants and loosen off the pilot. And the joyous pilot without leaving any chance first inquired about the presence of any Japanese troops around. Surprisingly, Mr.Pu Sherkhochung was somehow little familiar with English, so, he asked, “SIR, ARE YOU FLYING?”(sic) Then, the white-man understood and answered, “yes!” The two women praised pu Sherkhochung like anything. They took him to their village and served him with local foods. In the village, there were some good English speakers-Leujangur,Songjalun and Chungjahen with whom the pilot had had a good conversation with. The pilot stayed for two days in Songpher village and on the next day, a villager dropped him up to Tamenglong by foot. Just before leaving the village, they said that he had written a letter or some kind of certificate or something and warned them of keeping it safe. After a month passed, around 150 numbers of Japanese soldiers reached the village. And the villagers, in order to keep away from the Japanese notice, hid here and there; it was never found back. Till today, nobody knows what would have been written inside. (It remained  mystery)

"BE excellent in what is good; BE innocent of evils; And God of Peace will soon Crush satan underneath your feet"

Glance of the Blog